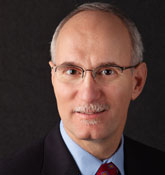 GUS ROUSONELOS, M.D., F.A.A.P. was born and raised in Joliet, Illinois until his family moved to a farm in Plainfield when he was in fourth grade. He spent his summers working in the family business, Rousonelos Farms, growing, harvesting, and packing vegetables. He attended the University of Illinois in Champaign/Urbana and received a Bachelor of Science in Liberal Arts and Sciences. He continued to work summers on the family farm until he completed his undergraduate studies.

Dr. Rousonelos attended medical school at the University of Illinois. He then traveled to Virginia for his pediatric residency at The Children's Hospital of the King's Daughters in Norfolk.

Dr. Gus, as he is known by his patients and their parents, returned to Illinois after completing his pediatric training in 1987 to begin pediatric practice in Naperville. He served as Vice-Chairman of Pediatrics at Good Samaritan Hospital from January, 1994 to December, 1995 and as Chairman of Pediatrics from January, 1995 to December, 1996 He is board certified in Pediatrics, a Fellow of the American Academy of Pediatrics, a member of the DuPage County Medical Society, and a member of The American Medical Association.

Dr. Gus and his wife, Georgia, live in Naperville. Georgia practiced dentistry for 14 years before deciding to stay home full time to tend to her three busy children, Katherine, Maria and Andrew. Katherine and Maria have since graduated from college and Andrew is in high school.

Dr. Gus enjoys the challenge of parenting. His children are always teaching him things he hasn't learned yet. When he's not spending time with his family or practicing pediatrics, he likes to read, exercise, cook, travel, and listen to all types of music. He also enjoys gardening, and cheering for the Cubs, Bears and Bulls.

Dr. Gus values his personal relationship with his patients and their parents. He strives to achieve the common goal of a healthy lifestyle for his patients and helping their parents with the difficult, but fulfilling, task of parenting. He also has a special interest in skin conditions and sleep issues in children. 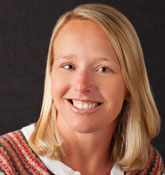 ERIN SHANKS, M.D., F.A.A.P. grew up in North Aurora, IL. She attended the University of Iowa in Iowa City and received her Bachelor of Science degree in Biomedical Engineering. She received her medical degree from Loyola University Chicago Stritch School of Medicine in 1997. Dr. Shanks was elected to the medical honor society, Alpha Omega Alpha, while at Loyola. She went on to complete her pediatric residency at Loyola University Medical Center in 2000 and has been working at ABC Pediatrics ever since. She is Pediatric Board Certified and a fellow of the American Academy of Pediatrics.

Erin and her husband, Tony, reside in Naperville with their two children, Sophie and Luke. They enjoy spending most of their time supporting the kids in their activities but really cherish the more quality time spent together.  As a family, they enjoy outdoor adventures, hiking the National Parks, biking, or attending the various Chicago sporting events. Despite being busy with her family and her career, Erin still finds time for fitness. You can often find her swimming in the very early hours before coming to work each day.  She has been a swimmer since childhood and still spends hours in the pool as a member of The Naperville Waves, a Masters Swim team.

Dr. Shanks enjoys providing quality care to children of all ages. She loves to be able to spend time with her patients in the office and get to know them personally. She is devoted to educating families and helping their children grow into healthy young adults. She feels so privileged to be involved with ABC Pediatrics working in a career that she loves. 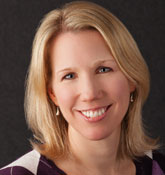 KAROLYN LAW, M.D., F.A.A.P. grew up in the near west Chicago suburb of Riverside, IL. She attended Iowa State University on a full athletic scholarship to play volleyball. She graduated in 1995 with a Bachelor of Science with Honors in Zoology. During her senior year, she became a member of the Phi Beta Kappa honor society and was named Iowa State University's Female Athlete of the Year.In 1999, Dr. Law received her medical degree from Rush Medical College in Chicago. She then completed her pediatric residency at Loyola University Medical Center in 2002 and subsequently became Board Certified in Pediatrics and a Fellow of the American Academy of Pediatrics. She joined ABC Pediatrics, Ltd. in December, 2003.

Dr. Law is married to John Honcharuk, an Athletic Trainer for AthletiCo, Ltd. and they reside in Aurora. She is now enjoying both the rewards and challenges of being a mom with the birth of her son, Stephen and daughter, Anna. Prior to becoming a parent, some of her favorite pastimes included hiking in Colorado, reading Harry Potter novels on a beach, gardening and cooking. Now you are more likely to find her on a family stroll through her neighborhood, reading “Guess How Much I Love You” on the couch, occasionally remembering to water the house plants, or watching the Food Network.

It is an amazing thing to be a part of children's lives and watch them grow. As your pediatrician, Dr. Law is dedicated to helping you raise happy and healthy children.

USHMA PATEL, M.D., F.A.A.P. was born and raised in the northern suburbs of Chicago. She attended the University of Illinois in Champaign/Urbana where she received a Bachelor of Science in Biology with a minor in science education. After her undergraduate degree, Dr. Patel returned to Chicago where she attended medical school at Northwestern University. After she graduated from Northwestern with her Doctor in Medicine, she began her residency at the Children’s Hospital of Wisconsin in Milwaukee. She spent her three years in Milwaukee working long hours, and participating in many community and academic projects.

Dr. Patel focuses on spending time with her patients and educating as part of each visit. She is currently accepting new patients of all ages and looks forward to meeting prospective families at “get to know the doctor” visits. If you are interested in meeting Dr. Patel, please call to set up a prenatal or family interview. 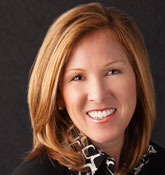 Dr. Persak has a special interest in newborns, breastfeeding and first time parents. She has an additional interest in children with asthma and allergies, including seasonal, environmental and food allergies. If you are interested in meeting Dr. Persak, please call to set up an interview.

LARISSA SCHULZE, C.P.N.P.–P.C., I.B.C.L.C. was born and raised in Cedar Rapids, Iowa. She began her collegiate career at the University of Iowa in Iowa City, IA where she completed her Bachelor of Science in Nursing. Following graduation she relocated to Chicago and began working as a nurse in the Neonatal Intensive Care Unit at Rush University Medical Center. She spent five years as a NICU nurse while pursuing her Doctorate in Nursing Practice from Rush University. She is a Board Certified Pediatric Nurse Practitioner in Primary Care and comes with several years of experience in primary care pediatrics. She is also a Board Certified Lactation Consultant and has assisted many mothers and babies with the struggles and triumphs of breastfeeding.

Larissa spent the first 7 years in the Chicagoland area living downtown, exploring the city, and trying new restaurants. She now resides in Batavia, IL with her husband, Andy, and her sons, Henry and Mark. In her spare time she loves spending as much time as possible outdoors and enjoys spending time at her family’s lakehouse in Wisconsin.

Larissa feels privileged to be a part of ABC Pediatrics providing care to children and their families. She loves the ability to work with children and watch them grow into young adults. She can’t wait to meet you!

Find us on the map